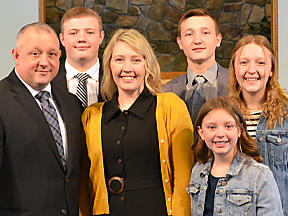 Pastor Beecher Williams was invited to go to the Berean Baptist Church for the first time by a bus worker in Rockford, IL. He would ride the bus for several years before getting saved at an all-night youth activity, when his youth pastor, Mark Swanson, led him to faith in Christ. After getting saved, Pastor Williams began to grow in Christ by attending church regularly, attending summer camps and enrolling in the Christian school, being mentored by many godly men and women.

At a summer camp, Pastor Williams surrendered his life to preach the gospel. After high school he attended Golden State Baptist College in Santa Clara, CA. He graduated in 2000 with his Bachelors degree in Pastoral Theology, and again in 2002 with his Masters in Ecclesiology. Pastor and Mrs. Williams were married in July of 2002, and began serving on the church and school staff of Berean Baptist Church immediately thereafter. God has blessed them with four children: Titus, Caleb, Chloe and Esther. Together Pastor and Mrs. Williams have served the Lord in various capacities for nineteen years in full-time Christian service.

The Lord began working in Pastor Williams’ heart several years ago regarding pastoring; and after the Lord confirmed this call, Pastor Williams and his wife began seeking God’s direction in their lives. After many months of seeking God’s perfect will and timing, Pastor Williams accepted the call to pastor the Maranatha Baptist Church in Mt. Pleasant in October of 2021 and assumed the pastorate on December 26, 2021.

Sunday (all services in person/Facebook live)

In events of any holiday or possible bad weather, be sure to contact the church for the latest update on service and activity changes.